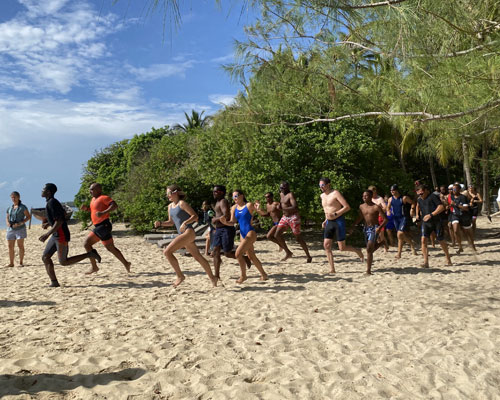 Triathlon sprint Vipingo registration was on the white sands of the East African coast at 7 am with re-hydrants and copious bottles of mineral water – average temperature 33 degrees c!

750-metre open water swim at high tide – a metre at the deepest point (to give some water height above the coral and sea urchins), excluding 75 m start to sea and same from sea to transition point. The course was set as a triangle, Daniella had a strong start and held her own throughout the course completing in 14.40…. Coming out the water 7 th or 8 th (50 participants). A couple of positions behind her cousin Bella and Uncle Michael.

Flemming then picked up the bike (20 km with 214 m elevation, 14 km uphill, 5 down with speed bumps (?!) – one participant lost his brakes on the way down, flipping his bike – all well. The incline at one point on the way up was 6-8%. Flemming finished, survived and plans to do some training in 2022.

The 5 km run is billed as a flat run with vervet monkeys through a shady canopy of indigenous trees – the shade was definitely lacking, not a monkey in sight. The route is through a local village and the children very sweetly ran alongside in short bursts which was a great support – the water station was a very welcome sight and 39 minutes in that heat was acceptable for Nicola.

Michael clocked 1 hr 58 mins. 5 years ago, Michael snapped his Achilles’ tendon in a motorbike accident and walking properly again was questionable. His physio got him up on to crutches, then soon walking unaided. He challenged him to a triathlon 6 months later. He completed it back then in 4 hours. A real story of positive goal setting, hard work and a lot of stretching, massage and acupuncture.

Imara-Bella Thorpe (who swims for Kenya), won the swim in under 11 minutes. Imara went to Millfield and is now at Edinburgh uni.

Race report by Nicola – What an amazing experience!