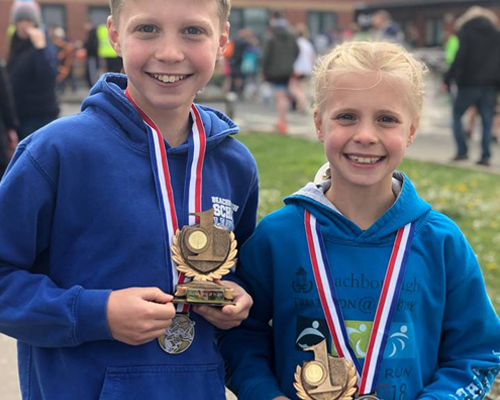 Beachborough Triathlon Club achieved some great results at Southam Triathlon this weekend. It was lovely to see so many Beachborough members competing in this well organised local event. We had good representation throughout all age categories, and for some of our members, this was their first ever triathlon – so well done!

Sam and Mollie both won their age categories this weekend! Mollie won tristar and Sam won tristar 2. They have kindly sent in their race reports:

Sam – “On a slightly chilly Sunday, lots of us from Team Beachborough took part in Southam triathlon. This was my first race of the season and as a second-year T2, I was hoping to do well. The swim went well despite a slight hold-up and then ran out to transition. I had lots of encouragement from the parents as I heard lots of people cheering me on. The bike was hard work but I managed to gain some positions and then back into transition for the run. I had a slight delay as I took off my race belt instead of my helmet but quickly tried to rectify this. I had a strong run and overtook a few people and was delighted to learn that I finished first overall”.

Mollie – “This was also my first race of the season and my first as a T1 distance. The increased distance on all 3 elements made me more determined to work harder to try and get a trophy. The swim went well and I kept my position in the pool then ran out for the bike. I managed to overtake people on the bike and kept trying all the way around. The run leg also went well and I enjoyed the longer distance and feel this suits me better. My favourite part is the run because I push hard for the last part and pick off the last few competitors. I was really proud when they announced the results”.

There was a great effort from all who competed, and it was lovely to see so many of you representing Beachborough Triathlon in the new kit!